Both are born builders, each with over 30 years of construction experience across Canada and the U.S.

With unparalleled expertise, supported by experienced teams, they provide the ultimate in personalized service and exceed client expectations on all fronts. They have well-earned reputations: the excellence of their achievements is the gold standard in the industry.

A native of New Brunswick, Serge Chiasson’s aptitude for and interest in building things were apparent even at a young age. From a long line of carpenters and artisans, he spent his summer vacations working on various construction projects.

In the mid-eighties, after studying urban planning and business administration at the University of Ottawa and the Université du Québec à Montréal, Chiasson, still passionate about building, decided to enter the construction field through a four-year apprenticeship in carpentry. Upon completion of his training, he became a full-fledged carpenter-joiner. He then moved to western Canada where he acquired broad-ranging and extensive experience working on the construction of a number of major building complexes and high-rises in Vancouver, Whistler, Calgary and Edmonton for some of the largest Canadian construction firms, namely BOSA, PCL and ELLISDON.

In the mid-nineties, seeking new challenges, Chiasson co-founded Kong Renovations, a Vancouver-based company that specialized in the renovation of commercial and industrial buildings. He honed his skills as a foreman and project manager working on a wide variety of renovation projects involving restaurants, research laboratories, hotels, professional offices and boutiques.

In 2000, Chiasson settled permanently in the Montreal area where he soon became involved in several major expansion and renovation projects in industrial buildings owned by clients such as Pfizer, Bombardier and Pratt & Whitney. Subsequently, he participated in a number of major construction projects, such as the Interquisa Canada petrochemical plant in Montreal-East, the International Terminal at the Montreal Airport and the Marriott Airport Hotel. Chiasson has also worked on a number of commercial building projects ultimately tenanted by dental and medical clinics, professional centres, supermarkets and banks.

A born entrepreneur, with his unparalleled expertise and experience in carrying out and managing construction projects, Chiasson founded CADILLAC CONSTRUCTION in 2007.

Today, the company counts several achievements due in large part to its loyal and ever-increasing customer base.

The son of Italian immigrants, Raffaele grew up in working-class Connecticut in the U.S. His father initiated him into the rudiments of the building trade at a very young age. Having learned the value of hard work, integrity and resilience from his parents, Raffaele has worked for close to 20 years in the residential sector in Québec and the U.S. He built a solid reputation in large-scale residential development projects through the quality of his work and unparalleled after-sales service. His expertise makes him a leading player in the industry.

In 2006, his passion for building led him to focus on commercial and industrial projects. His commitment to quality remains his trademark. Raffaele’s client relationships are founded on trust and satisfaction, basic values that reflect his professional commitment to quality.

His association with Serge Chiasson at Cadillac Construction is a further step towards excellence given their combined skills and shared values. 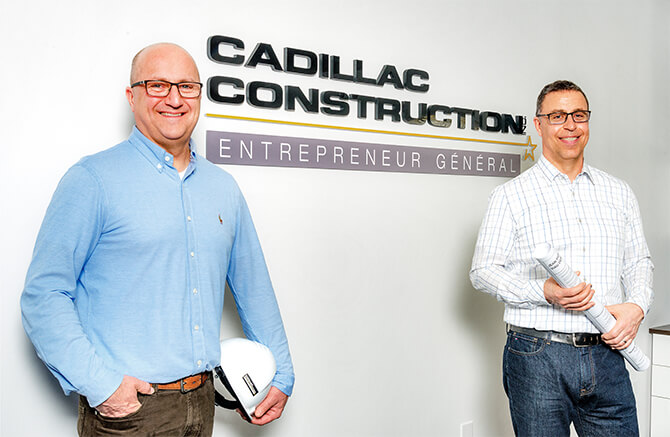 Cadillac Construction recognizes that in today's competitive market, an integrated quality control system is essential in order to provide our customers with unrivalled construction services.

The result of our system, not only assures our client's peace of mind, it also provides a responsible and sustainable footprint, which is a legacy for future generations.